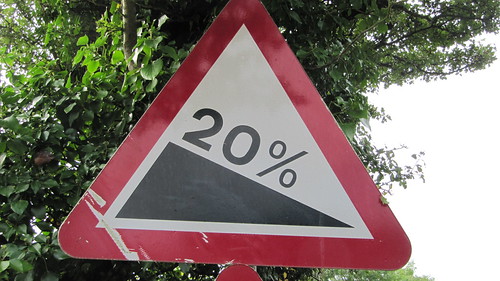 Even if you have already learned how to accurately and quickly calculate a tip using mental math, you may still be struggling with percentage questions on the GMAT. Today we will look at three questions that test percents in different ways.

Let’s start with problem 71 on page 162 of the Official Guide, 13th Edition. This question is a very straightforward percent question as far as setting up the equation. The total is 2,420 stocks which has to be broken down into two categories, one of which is 20 percent greater than the other. Therefore, the equation is: 2,420 = x + 1.2x

Solving for x results in 1,100, which, not coincidentally, is answer choice C. But C is NOT correct! The trick in a question such as this which seems to be testing reallybasic concepts about percents is in the wording.  With all the language changes from different, higher, lower, percent greater you can quite easily become confused and answer the question incorrectly, not because you made a math mistake but simply because you misread it. Always double check the question. In this case, because the question is looking for the number of stocks that closed higher (represented in our original equation as 1.2x) , we should multiply 1,100 by 1.2 to find answer D, 1,320.

Now let’s move on and look at a different type of percent problem. Flip to page 164 and look at question 84. The Official Guide gives a very official explanation for this question with yet another formula you might think you have to master to do well on the GMAT. Instead, let’s think about what compounding does. Compounding means that at some point during the year (every three months if compounded quarterly, for example) the interest already earned is added to the principal and you start earning interest on that interest as well. Since the balance has been increased, by the end of the year, you will earn a little bit more than if you just had simple annual interest.

Therefore, even if you don’t know the formula, you can use process of elimination. The simple interest on $10,000 at a rate of 8 percent would be $800. Knowing that compounded interest results in a higher amount, you can eliminate answers D and E. You should also be able to tell that answer A is too large. Answer C ($816) is correct. Half the interest ($400) is earned by the 6 month, which is also the compounding point in this question, so you will also earn the remaining 4 percent not only on the original $10,000 but also on that $400. That comes out to $16 more than the simple $800 earned for the year.

A third way that percents are tested is with percent change. Percent change has a simple formula, way simpler than the Official Guide would like you to believe. That formula is: difference⁄original

The explanation for question 114 on page 168 uses way more variables than are necessary. All you need to use is a single x. If x represents the original number of workers, then your formula becomes (.16)x – (.09)(1.2x)⁄(.16)x. The numerator is the difference (16 percent originally minus the 9 percent new value in an overall larger population that is 20 percent greater), and the denominator is the original 16 percent. The result is .325, which is the same as 32.5 percent. Since the question specifies that you are looking for an approximate percent change, you should feel confident selecting answer B, 30 percent.