30 Day GMAT Success was written because Brandon wanted to share his unique GMAT test taking experience with those hoping to follow their dreams via business school as he did.

It is not typical for people to impulsively take the GMAT in 30 days time, but it does happen. Plans change, jobs get lost, people have epiphanies about their future or begin to realize their career goals more clearly (as was the case with Brandon). Those in this position may find themselves at a loss as to how they are going to cover the heaps of material necessary to pass the GMAT within this short period of time. They are bombarded with textbooks, strategies, tips, techniques and no end of programs and sources promising them a great score.

This left Brandon, and most likely others in his position, at a loss. Indeed Brandon noticed repeatedly that people were posting questions on the various GMAT forums such as “GMAT in under one month – help!” or “how do I study for the GMAT in four weeks?” (Let alone all of those who were retaking one month later and needed to drastically improve their scores). 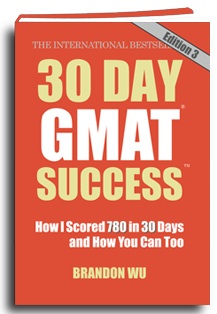 Brandon wanted to tell his story and in doing so reassure those GMAT takers who had found themselves with little preparation time that getting a high score in a short time was entirely possible, and that a plethora of textbooks, tuition, and expensive courses were not necessary. Instead what Brandon had found worked successfully for him was a dedicated, structured study plan and a handful of effective techniques. This approach scored Brandon an impressive 780 on his first GMAT attempt.

‘30 Day GMAT Success: How I Scored 780 in 30 Days and How You Can Too!’ was born from Brandon’s desire to share his experience and study plan with all of those brave and bold enough to attack the GMAT in one month, regardless of what their circumstances might be. It is also designed to help make those test takers feel relaxed and in control of their preparations and not overwhelmed by the heaps of contrasting information- and disinformation – available that can often leave GMAT takers dazed and confused.

Time to ace the GMAT? Learn more about how you can achieve your own GMAT success with 30 DAY GMAT Success!