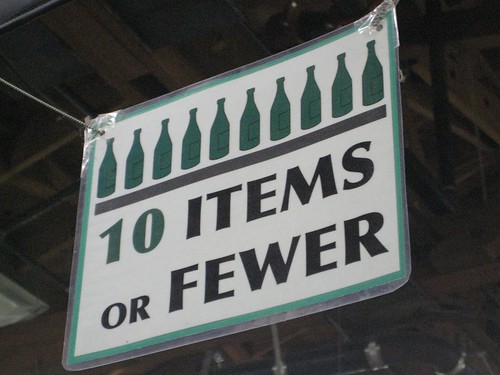 Finally – a store that got it right! Despite a very simple rule that less is used for what cannot be counted (snow, anxiety, interest, beer) and fewer is used for what can be counted (snowflakes, moments of anxiety, interesting people, bottles of beer), grocery stores across America stubbornly refuse to change their “10 items or less” signs. This may lead one to believe that proper grammar and diction don’t matter, but they do.

A spate of recent articles suggests that proper grammar in the workplace may be more important than you realize. The Wall Street Journal story This Embarrasses You and I* kicked off a series of related articles this summer that all emphasized the importance of grammar during a job hunt and in the workplace. (See also _Why Grammar Counts at Work _and I Won’t Hire People Who Use Poor Grammar. Here’s Why.) Bad grammar is all around us and some people—people who may matter a lot to your career—really do notice it.

Sticklers for grammar might find those who are truly ignorant of the rules obnoxious, but they might also find the over-correctors just as bad. The over-correctors are those people who think that whichever word sounds more formal or educated is the grammatically correct one, and then they sneer at the people who actually follow the rules, regardless of sound. The most egregious of such violations include saying I instead of me, well instead of good, and whom instead of who. Here is a quick refresher:

I: the subject (person doing the action) of a sentence or phrase

She said that I was the person in the Darth Vader costume at the Halloween party.

Mitchell and I studied together for the GMAT, but I scored much higher than he did.

Me: the object (person receiving the action) of a sentence or phrase

The professor was smiling as he handed the midterm back to Graham and me.

Just between you and me, I think my sister’s new restaurant serves terrible food.

Well: an adverb. Commonly answers the question “how” in order to describe an adjective, adverb, or verb.

How are you doing? I am doing well.

Good: an adjective. Commonly answers the question “what is it like” in order to describe a noun.

*****If you aren’t sure whether you should say well or good, simply substitute in another adverb or adjective. You would never say I am quickly or I am happily, so you shouldn’t say I am well. The construction I am needs to be followed by an adjective.

Whom: the object (person receiving the action) of a sentence or phrase

Whom did you call to ask about the city’s policies on leaf collection?

The person next to whom you were seated was wearing an enormous sunhat.

Who: the subject (person doing the action) of a sentence or phrase

Who called us to ask why we hadn’t put our leaves into clear trash bags?

The person who was wearing the enormous sunhat was seated next to you.

Even if you are an accountant or a programmer, Kyle Wiens won’t hire you if you can’t pass his grammar test, and you can bet that other employers feel the same. So while you may not see any practical use of the Pythagorean Theorem or the ability to logically complete an argument beyond the GMAT, consider the time you spend practicing for the Sentence Correction portion as a little investment in your future. Proper grammar just might give you an edge over the competition when you get out there in the real world.