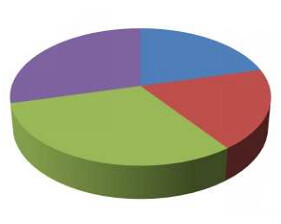 One question that a lot of people have is just what exactly their GMAT score means. They aren’t sure what a “good” score is and how much improvement they can reasonably expect to see after investing time in studying for the test. They may not be certain whether they should apply for programs that have a mean or median score that is higher than what they achieved on their test. Today’s post will break down the four main sections to help you understand these issues better.

The mean score for Analytical Writing is 4.4, out of a total possible score of 6. This score is not incorporated into the composite score. The Guidelines for Using GMAT Scores strongly discourage decision making about applicants based on a one-point different on the Analytical Writing Score. The Guidelines also recommend carefully considering that impact of a non-native English speaker’s deficiency in English on his overall test score and to not necessarily see low scores in those cases as an indicator of poor reasoning skills.

The mean score for Quantitative is 37, also out of a total possible score of 60. Note how much higher the quantitative mean is than the verbal mean. Keep that in mind when you are comparing your raw scores to decide on which section to focus your studies. The total is again deceptive. A score of 7 will place you above just 1% of all test takers, and a score of 51 will place you above 99% of all test takers. However, just one point lower, a 50, drops you to the 90th percent ranking and two points lower, a 49, drops you all the way to the 83% ranking. Keep this important difference between the quantitative and verbal sections in mind when you decide whether to take the GMAT a second or third time. If your raw quantitative score is near the top of the scale, getting just a one point raw score increase could be a big deal for your composite score.

For the composite score, which is made up only of the Verbal and Quantitative Sections, a 544 is the mean score. A 760 will put you at the 99% ranking and a 500 drops you all the way to the 33% ranking. The minimum score is a 200. Because of these variations, it is difficult to predict how many points you can increase with a certain amount of studying. Going from a 400 to a 500 is a 21% increase, which is easier than going from a 500 to a 600, a 29% increase. In general, the lower your score is to begin with, the easier gains are to achieve.

Also remember that the Guidelines for Using GMAT Scores state that there is a standard error of measure of 29 points. This means that if you took the GMAT three months in row without studying in between attempts, you could expect to see a difference of 30 points higher or lower than your original score on each subsequent test. However, because any test, no matter how well designed, can only be an estimate of your abilities, GMAC goes beyond that 29 point error and recommends using a 40 point standard error of difference for decision purposes. What does that mean for you? It means that all else (GPA, work experience, interview, recommendations, etc) being equal, if you got a 600 on the GMAT and another candidate got a 640, your scores should be viewed as equal. It also means that schools are strongly discouraged from having a hard cut-off point for GMAT scores. It wouldn’t make sense to toss an application with a 590 GMAT automatically, when a 590 could be the same as a 610. So don’t discourage yourself from applying for a school that you may think is a little out of your reach based on reported scores of accepted applicants. Be sure to consider all factors that you bring to the application package.

Want more information on how your GMAT score will be interpreted and used by schools? There is no better place to get it then from the folks at GMAC themselves!