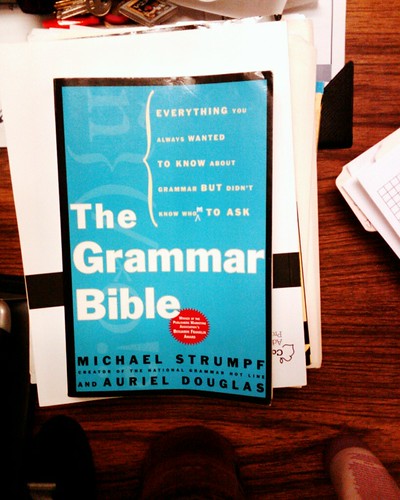 You don’t have to read the grammar bible to do well on GMAT sentence correction. Most questions test the same small handful of grammar rules such as parallelism, agreement, verb form, and logical predication. But every now and then, the test writers will throw a little something new in the mix. If you’ve been working through the Official Guide 13th Edition these curveballs won’t be entirely new for you, but it does take a keen eye to notice them sometimes. In today’s post, we are going to look at two of those topics that you may not normally be on the lookout for: redundancy and diction.

On page 681, there are two questions that deal with redundancy. You might think at first that question 55 is completely fine. It certainly sounds fine and there is a solid reason to eliminate some of the answers. Choices C and D both lack agreement between programs and enables. But what about the other options? Choice B eliminates be able. Why would an answer do that? When a seemingly random word or phrase is eliminated, that’s when you might want to check for a redundancy problem. Earlier in the sentence we have the verb enable. Therefore, be able is redundant and should be eliminated.

Question 56 has the same problem but is a bit more complicated. Also is redundant with both, but that only eliminates choices A and B. How do you know if repeating the preposition of would also be redundant? Because of comes before the word both, you don’t need repeat it. Remember, when in doubt, select the more concise answer.

Now look at question 83 on page 687. If you are attentive to the grammar errors that the GMAT commonly tests, you’ll probably see the subject/verb agreement error first, dioxins…comes. That will get your choices down to B, D, and E. If you don’t see another problem with the sentence, you can look for differences among the answer choices. There is a clear division between much and many. This is an example of a diction error that isn’t tested very often, but is worth noting because it follows a rule that is very easy to learn. Much is for collective concepts or items that can’t be made plural (snow, disgust, intelligence) and many is used with items that can be counted individually (people, apples, countries). Dioxins is plural, so the word must be countable and requires the word many. Be sure to check out the Sentence Correction section in my book for more examples of commonly confused words that you might see on test day.

So what’s the take away from today’s post? No, you don’t have to take a remedial English class, but be sure as you work through the Official Guide questions that you take note of why the wrong answers are wrong and keep making notes about types of errors you see so that you can look for those on test day.